Hello and welcome to the very first Red Shoot Camping Park blog – RED SHOOT RAMBLINGS! I will endeavour to provide you with a regular blog on topics ranging from New Forest flora and fauna to local historical information to camping related articles and much, much more.

I thought that since this is my first blog it would be apt to give you some information on the history of the Red Shoot Camping Park and my family’s involvement with it so I spoke to my mother, Sonya Foulds, who has been involved in the running of the site since the 1970s and these are her memories, I hope you enjoy them – Jaqui.

The Red Shoot Camping Park was officially established in the mid-fifties, having previously been part of Linwood Farm, a working commoner’s dairy farm.  The original Linwood farmhouse is a beautiful part thatched forest cottage which, situated directly east of the camping park and our camping fields, along with many other Linwood properties, would have belonged to the farm in days gone by.  There would more than likely have been outbuildings and possibly small dwellings at some time in the past and there is still evidence of these if you look carefully.

My father told me once about a famous occasion when a family were happily sitting around their picnic table having breakfast in the morning sunshine when the table and breakfast slowly sunk three feet into the ground – many years ago an old well had been partly filled in and the ancient wooden lid had finally given way!  Thankfully, they were able to retrieve their table and breakfast and you can rest assured that the well is now safely filled in although it is still possible to see a slight dip in the ground where it once was. 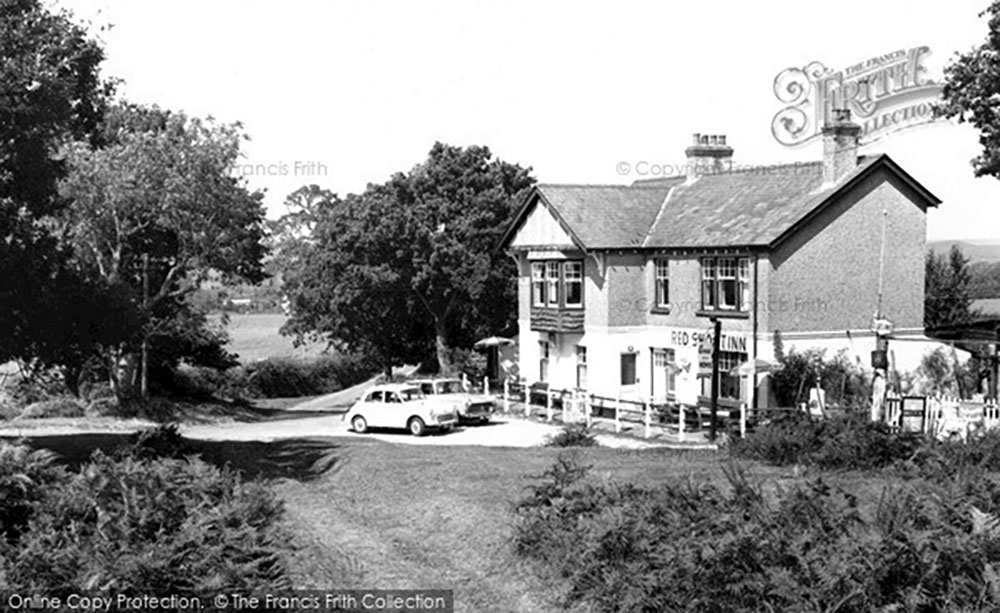 The park came into our family in 1966, when my parents, Bunny and Doris Hare, bought both the pub and the camping park in their retirement!  A warden and his wife looked after the camping side of the business which was really just a small side-line of the pub. There were toilets and showers which, although fairly primitive, were quite a luxury in the forest for campers at the time since free camping was still permitted by the Forestry Commission but no other facilities were provided.  In spite of a cattle grid at the entrance, the ponies regularly got into the field through the rickety fencing and it was all hands on deck to get them out again before they trampled tents and manured the field!
Having returned from abroad, my husband Robin and I were given the opportunity to buy my parents out, and so in the spring of 1971, we moved into the flat above the pub.  We had two young daughters, Angela and Jaqui and soon, Caroline came along.

We had ten happy years there, building the business up.  The camp shop, in those days, was attached to the pub and was actually just a wooden lean-to affair which regularly flooded during heavy rain.  We took on the village post office and incorporated it into the shop which became the hub, for many Linwood villagers, of gossip and chatter.  We also had petrol pumps at the front of the pub which you can see in many old photos.  We built two extensions on the pub and carried out renovations and upgrading to the camping park shower and toilet block which was originally a milking parlour and cattle shed.
Eventually we decided to sell the pub but retain the camping park and with lots of hard work, investment and help from my brother, Steve, we built it up into a well-known and popular little park.

In 1988 my daughter Jaqui and her husband Nick, joined the family business and they have worked tirelessly, bringing in wonderful improvements and modernisations.  No more daily emptying of cess pits or tokens for the shower meters, everything now is modern and spotless. They have even put underfloor heating in the shower block!
Today, the shop is adjacent to the office and includes a bakery. The part of the facility block which was until recently our shop, has been converted into a beautiful 2 bedroom holiday cottage ideal for those who want a little more luxury.

They have done a wonderful job, making it the first class park it is today, whilst still maintaining its friendly, informal and relaxed atmosphere.

Jaqui and Nick have two daughters, Lulu and Kitty, so who knows, Red Shoot may go down to a fourth generation!!