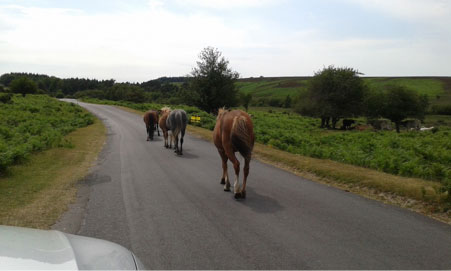 Almost 10,000 people have been caught speeding in the New Forest as part of a crackdown on motorists to prevent more animals being killed on the roads.

Last year 55 animals were killed and another 21 injured on the roads, a record low, with 127 incidents reported in 2015 as opposed to 140 the previous year.

The number of animals, including ponies, cows, donkeys, sheep and pigs, killed and injured fell from 91 to 76.

However campaigners and the police are bidding to prevent further deaths and half of the motorists caught were driving on unfenced roads where animals can roam.

The police have teamed up with the New Forest Commoners’ Defence Association (CDA) and New Forest Verderers to run the project using infra-red technology to crack down on illegal driving at night.

Head Agister Jonathan Gerrelli, who is also a Commoner who owns animals in the New Forest, said the information collected will be analysed to look at how the problem can be best tackled in the future.

He said: “Animals do not have any road sense. When drivers see an animal on the road or on the verge they need to slow right down and give the animal plenty of space. Drivers should be especially careful at night.”

CDA chairman Graham Ferris said: “The number of drivers caught driving at well over the speed limit on forest roads is totally unacceptable. Motorists are putting the animals, themselves and their passengers in danger and risk seriously damaging their vehicles. Many are now facing fines and points on their licence. The animals are owned by commoners and it’s extremely distressing to see your pony dead on the roadside or having to be dispatched by an Agister because it’s too seriously injured to survive.”

Nigel Matthews, the New Forest National Park Authority’s Head of Recreation Management and Learning, is an organiser of the New Forest Animal Accident Reduction Group of organisations working to protect the animals.

Saying most speeding motorists are locals who may have become complacent about the animals, he said: “The New Forest is a world capital for wildlife with its habitats protected under international designations. This exceptional area for nature conservation is created by the grazing of animals which are allowed to roam free across the landscape.  So we’re appealing to drivers to slow down, help save animals from being killed or injured, and to help protect the New Forest National Park.”