ALL YOU EVER WANTED TO KNOW ABOUT THE NEW FOREST PONIES 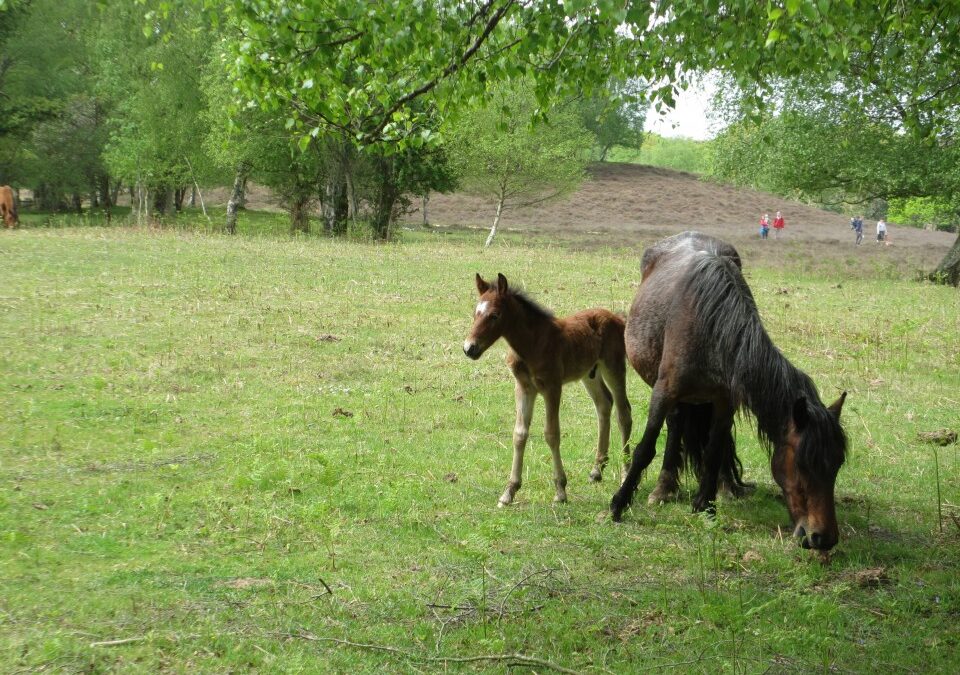 The New Forest is visited by millions of people from all over the world each year and one of its great attractions are the 3,000 or more New Forest ponies which freely roam the heathland and woods.

History
There have been ponies in the New Forest since the end of the last ice age and early records include the bones of a pony at Rockbourne Roman Villa, an interesting place to visit not far from here. The New Forest and its ponies have become interdependent and this beautiful part of our islands would be a very different place today had the ponies not been here. It would be very much more overgrown with none of the ‘lawns’ so synonymous with the area and the flora and fauna would be very different to that which we see today. William Gilpin, the artist, cleric and school master, wrote in 1791 of the New Forest pony “as the ornament of a forest scene, he is always picturesque” and that still holds true today.

Breeding
To keep the breed pure, New Forest pony colours are restricted, most are chestnut or bay (dark brown with a black mane and tail). They are not allowed to be piebald or skewbald (black and white or brown and white), spotted or cream with blue eyes. Well known for their hardiness they have a gentle nature and make great riding ponies but beware, stallions let out for breeding with the mares between April and July, or a mare with her foal, can become aggressive and dangerous so keep your distance.

Commoners
Although often described as ‘wild’, in actual fact, the free-roaming New Forest ponies are all owned by local people know as Commoners and most have some degree of contact or exposure to people, although they are still wary in the presence of humans. The term Commoner is ancient and dates back to the start of the 11th century when William the Conqueror first gave this area the name, the New Forest, and claimed it as his hunting ground. A Commoner is someone who owns or occupies land to which rights of common are assigned, these rights are attached to the land rather than the owner and are passed to the next owner should the property be sold.

Who cares for the New Forest Ponies?
The ponies are not only cared for by their owners but also by the Agisters who are employed by the local governing body of the New Forest, the Verderers of the New Forest. They watch over the forest and its stock, ensuring that owners meet the requirements of the Verderers in respect of stock welfare. They also attend road accidents involving forest stock, deal with injured animals and even have to destroy them if necessary. That, sadly, is one of the big disadvantages of having ponies, donkeys, cattle and pigs free to graze the open forest with unfenced roads running through. Please remember that these animals, and deer as well, are likely to cross in front of traffic at any time and they do have the right of way. The maximum speed limit is 40mph on unfenced forest roads and the use of reflective collars on ponies is a measure some Commoners are now using in an attempt to reduce the number of accidents involving ponies.

Drifts
If you want to see the Agisters in action, you should visit us in the Autumn when the famous ‘drifts’ are taking place. Our closest drift is at Appleslade, just over the road. During the drift, all the ponies are rounded up by the Agisters, Commoners and helpers on horseback and are counted, checked for health problems and branded. It’s certainly an exciting sight to see. If you ever see a pony that looks like it’s had a rather bad haircut carried out on its tail, this serves as a sign that that particular pony has been checked in the drift and that their marking fees have been paid. Each Agister has his own unique cut pattern. Whilst the Verderers state that the New Forest drifts are not a public event, if you keep your distance and don’t get in the way it is interesting to watch. Our closest drift is at Appleslade, just over the road from the Camp Site.
Following the drifts, auctions are held at the Beaulieu Road pony sales giving people the chance to sell their ponies or to buy new stock. It also serves as a major social event in the Commoning calendar and is well worth a visit to catch a glimpse of real New Forest life.

All in all, the modern New Forest Pony is an exceptional all-rounder with an endearing character that has developed as a result of both its unique environment and strong association with the people who have been responsible for the development of the breed.

Do’s and Don’ts
Please do not feed the ponies; there is a forest byelaw which forbids the feeding of forest stock and can get you a £200 fine and a criminal record if you do! Remember, too, that these animals are not tame – the gentlest looking pony can also kick and bite!
Drive carefully on the forest roads, the maximum speed limit is 40mph and remember that animals can wander into the road at any time. If you do have a road traffic collision with a New Forest animal it is an offence not to report it.