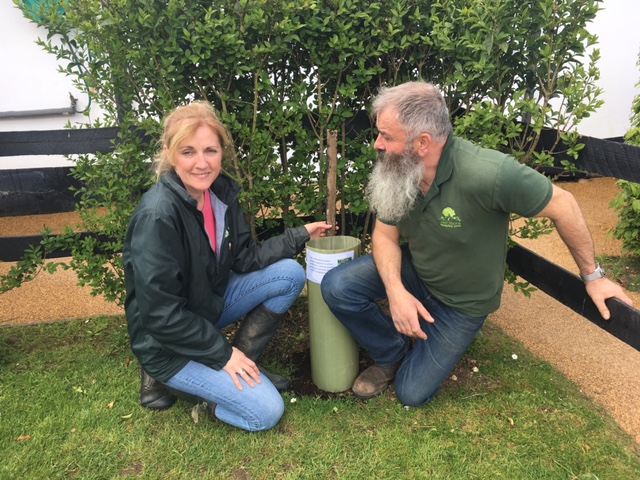 A family’s New Forest holiday park is flying high after birds, honey bees and butterflies helped wing it to a top environmental accolade from David Bellamy.  The world-famous botanist has presented Red Shoot Camping Park near Ringwood with his prestigious David Bellamy Conservation Award at its top gold level.

Professor Bellamy said the park’s owners, Jaqui and Nick Oldfield, have shown themselves to be true friends of the countryside through their careful eco-management policies.

It was originally Jaqui’s grandparents, Doris and Bunny, who first started welcoming camping guests to the four-acre park they opened almost half a century ago.  Jaqui’s parents Sonya and Robin then took it on, and for the past 18 years Jaqui and Nick have been at the helm and ensuring that Red Shoot remains a truly green business.

Professor Bellamy praised the park’s planting of hundreds of native hedging plants which provide valuable habitats and food resources for many animal and bird species.  He commended too the park’s sowings of wild flowers with high nectar-bearing blooms on which honey bees, butterflies and other pollinators can forage.  Jaqui and Nick have also installed bird and bat boxes around the grounds, and created two insect houses which help supplement the diet of feathered guests.  Low level lighting helps holidaymakers enjoy the night sky, and the park’s shop minimises the food miles of its stock by favouring local producers and suppliers.

David Bellamy said his award also highlighted tourism businesses acting as good neighbours to the local community, and that Red Shoot excelled here too.  It maintains close links with local schools and provides subsidised camping opportunities for youngsters, including those taking part in the Duke of Edinburgh’s award scheme.  Jaqui and Nick have also partnered with the British Heart Foundation to install a defibrillator on the park for use by the local community, and raise funds for various good causes.

Set in tranquil countryside, Red Shoot provides 100-plus pitches for campers and the owners of touring caravans and motorhomes, as well as a holiday cottage to rent.

“Red Shoot has a special appeal to holidaymakers who enjoy natural and unspoiled surroundings, and David Bellamy’s award underlines this crucial aspect of our park,” said Jaqui.  “It’s a real privilege to live and work in this wonderful part of Hampshire, and great to know that our efforts are being supported by someone like him.  Hopefully our award will benefit other tourism businesses as well by highlighting what a wonderful place the New Forest is enjoy a back-to-nature holiday!” added Jaqui.

There is more information about the park at www.redshoot-campingpark.com