Could New Forest Ponies be coated with glow in the dark paint?

IT IS the bright idea that could be used to prevent ponies in the New Forest being hit by cars. Campaigners are calling for the animals to be given a lick of fluorescent glow-in-the-dark paint to make them more visible at night. 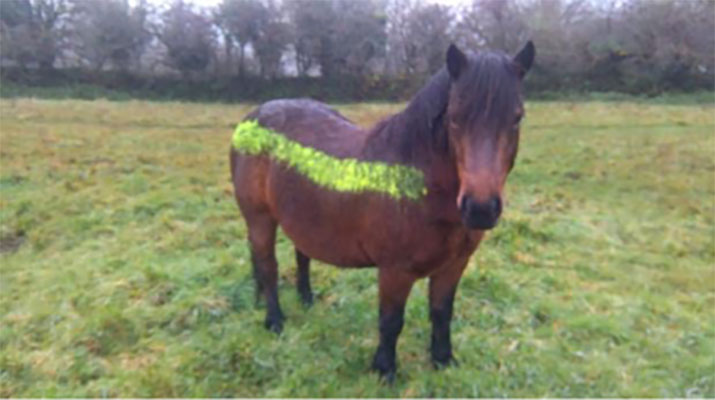 It follows the launch of an experimental scheme on Dartmoor, where blue or yellow stripes are being daubed on the side of ponies. The luminous substance, which is non-toxic, aims to reflect car headlights and reduce the risk of livestock being killed or seriously injured.

Members of the Dartmoor Livestock Protection Society decided to take action after the number of animals that died in crashes rose to almost 80 last year. Now a similar scheme could be introduced in the New Forest – which has a similar accident toll – if the Dartmoor project proves to be a success. The scheme has already been discussed by the Animal Accident Reduction Group, which comprises representatives from the National Park Authority (NPA) and other organisations in the district.

But major hurdles will have to be overcome before stripes start appearing on Forest ponies.
The paint being used on Dartmoor tends to fade after only three or four nights, which means a new, longer-lasting substance must be developed, and the effectiveness of the scheme could be undermined by the problem of ponies shedding their winter coats and losing the protective paint.

But animal owners in the Forest are keen to try new ways of preventing their livestock being hit by vehicles. Supporters of the Dartmoor project include Mike Cooper, a former chairman of the Commoners’ Defence Association (CDA).  He said: “Anything that helps protect the animals and doesn’t do them any harm has got to be worth a go. Many of the ponies in the Forest are already wearing reflective collars. They do a very good job but they don’t stop all accidents.”

The current CDA chairman, Graham Ferris, added: “We are aware of the Dartmoor initiative and will be watching with interest to see how well it works in practice.  I have significant doubts about the practicality and effectiveness of the scheme but that won’t stop us looking at it.”

Nigel Matthews, the NPA’s head of recreation management and learning, said: “The Dartmoor idea is an eye-catching way to raise awareness of animal accidents and was discussed at our last meeting.  We will be watching developments on Dartmoor with interest to see what we can learn’.