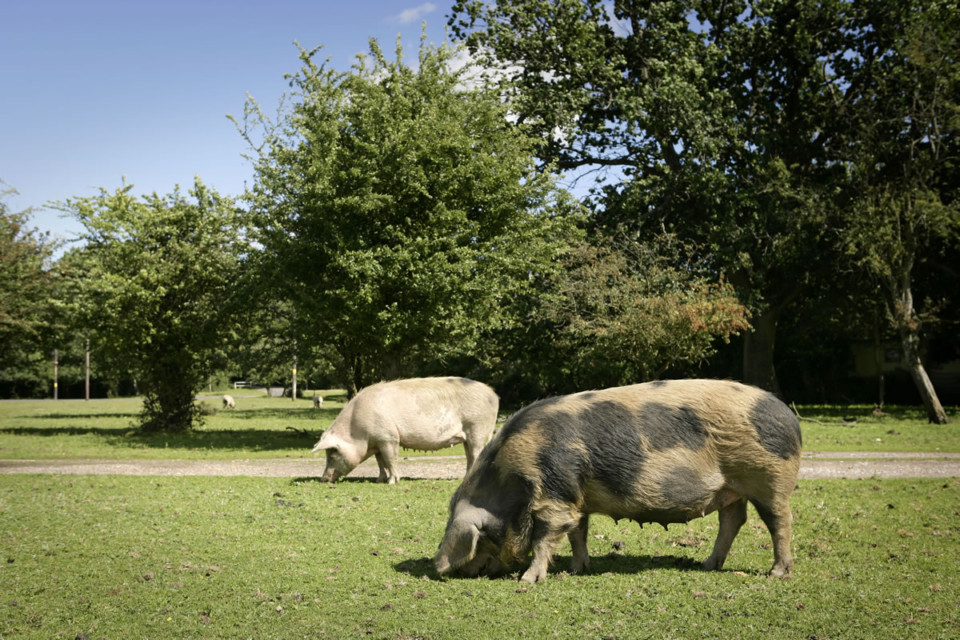 As the summer wanes and the bracken and leaves start to turn golden, so the arrival of pigs on the New Forest heralds the start of autumn.  Commoners with the right of Common of Mast turn out their pigs to forage the forest floor for acorns, beech mast, chestnuts, crab apples and whatever else they can find.

The term Commoner is ancient and dates back to the start of the 11th century when William the Conqueror first gave this area the name, the New Forest, and claimed it as his hunting ground.  A Commoner is someone who owns or occupies land in the New Forest to which rights of common are assigned, these rights are attached to the land rather than the owner and are passed to the next owner should the property be sold.

The right of Common of Mast or Pannage allows Commoners to fatten their pigs for slaughter and salting in the winter and has the added bonus of removing acorns from the forest floor which are poisonous in large numbers to the ponies, cattle and deer.  Apparently, unlike other animals, the pigs are able to spit out the toxic skins and enjoy the insides of the acorns!  The early green acorns are excellent for fattening the pigs and then, towards the end of the year when the acorns begin to ripen, the pigs are removed from the forest leaving the brown acorns for deer, game birds and other wildlife to eat.  This seed harvest is an essential part of their diet going into the hard winter months so removing the pigs before all the goodies have been hovered up is very important.

Sometimes though, finding your pigs is easier said than done as pigs can travel many miles in search of food or a mate and Commoners often have to rely on their intimate knowledge of the Forest and intelligence from helpful neighbours to locate their pigs at the end of the Pannage season.

In the 19th century as many as 6,000 pigs were released on to the Forest during the Pannage season but these days the numbers are much fewer as the practice of Commoning is in decline: somewhere between 200 and 600 pigs are now released.  A token fee is paid for each pig and they are all marked with an identity tag in their ear.  They must also be fitted with a ring through their nose which enables them to forage through leaf litter and surface vegetation but stops them from rooting into the ground with their snouts causing damage to the Forest.

There is no longer a breed of pig native to the New Forest but many old breeds  and rare breed pigs can still be seen snuffling around the Forest during the observation of this ancient tradition.

The exact dates for Pannage are decided by the Verderers and the Forestry Commission according to seasonal variations but it generally starts around the third week in September and last for approximately 60 days or until all the fallen acorns are mostly gone.  Last year in 2016, there was a heavy crop of acorns and as a result the Pannage season was extended to almost the end of December to ensure that not too many acorns were left. However, you may have seen pigs on the Forest outside of these times.  These will be breeding sows which are given special dispensation to remain on the Forest all year round providing they do not cause a nuisance.  They must also return to their Commoner’s holding each night.

A few years ago there was a breeding sow locally who became a little confused about where her Commoner’s holding was located and decided to return each night to a bed she had made underneath one of our visitors’ caravans!  Very exciting for everyone on the site but a little noisy at night for the caravan occupants when she decided to roll over!

Why not come and visit the New Forest at this magical time of year, we’re open until 31st October so call us now to make a booking or click here for further information!