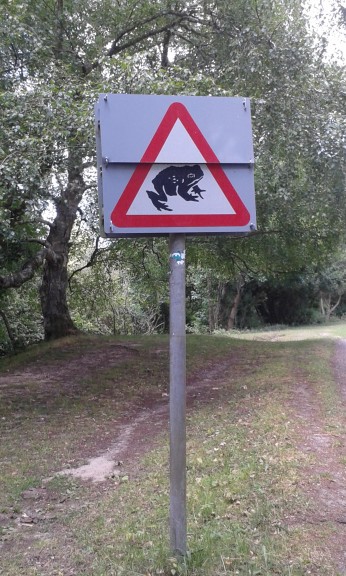 DRIVERS in Ringwood at rush hour are being urged to slow down to avoid the toads who are crossing the road a month early.

With the seasons going topsy-turvy, an early spring is bad news for the amphibians who cross Gorley Road to reach the gravel lakes.  Teresa Baker, who has organised Ringwood Toad Patrol for the last 27 years, told the Forest Journal that toads migrate to reach their spawning ground at dusk when the temperatures turn to 6C or above, usually at the end of February from 6pm.  But perfect breeding temperatures mean toads are crossing the road an hour early, hitting rush hour traffic and running the risk of an unnatural death.

“The toads are crossing the road four weeks early. We are urging motorists to slow down and be patient. We will stop the traffic to pick up a toad if we see one.  Toads have an important role to play in our eco-system. We are doing our bit in securing the next generation of these highly vulnerable species.  The roads are very busy and often it is mayhem on Gorley Road between 5pm and 6pm.  So please, if the motorists could be wary when the patrol is out, the patrol would be very grateful.”

In just one week of operating this year, the toad patrol has already picked up 400 toads.  They usually pick up between 1,000 and 1,400 toads each year, however over the last few years the numbers have been in sharp decline.