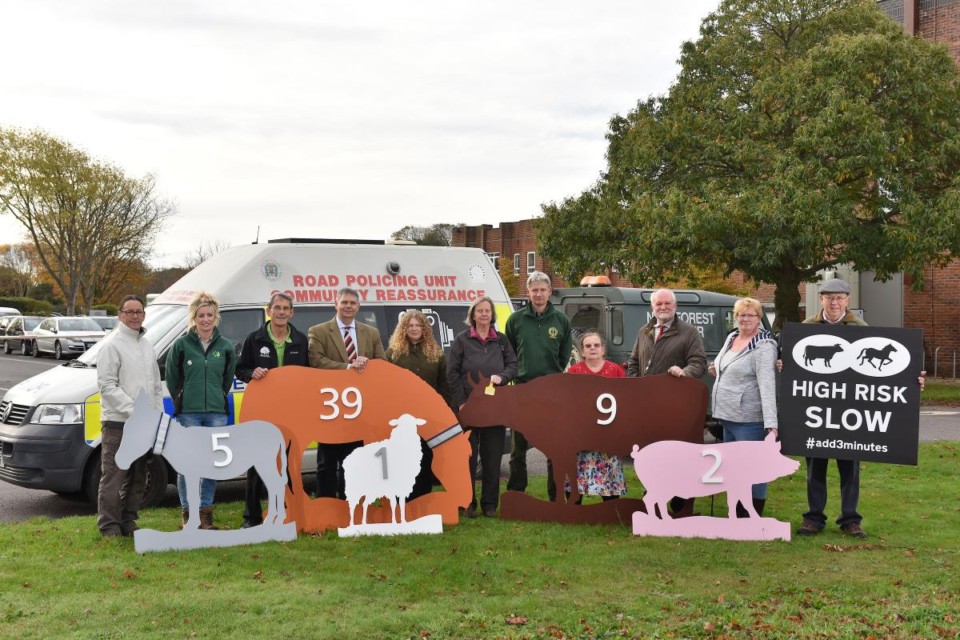 That’s the message to drivers travelling through the New Forest as the clocks are set to go back this weekend.

And as part of a renewed campaign aimed to combat the huge rise in animal deaths and injuries in the longer nights, motorists are being asked to add just three minutes to their journey.

The latest campaign has been organised by New Forest commoners along with other organisations including the National Park Authority and Hampshire Police.

Nearly 100 free-roaming animals were killed or injured in the New Forest last year.

A quarter of these – 25 animals – were killed or injured on just four key routes in the evenings in the two months after the clocks go back.

About three quarters of the accidents involved local drivers.

Commoner Jo Ivey, of the Shared Forest project, has seen three of her ponies hit in two years, two of which died.

She said: “Last September I received the dreaded call to say that my best mare had been hit by a car at Hatchet Pond nearly Beaulieu. She was in foal and when I got to her she was covered in cuts and bruises and you could see where her head smashed the windscreen.

“She survived but sadly lost the sight in one eye due to the swelling on her brain. Fortunately the foal survived too – we called him Lucky Jim and they are both thriving now.

“The woman driver was in shock and said “I’m so sorry”.

“The car was a write-off. I wish people would realise what a horrendous thing it is.”

Nigel Matthews, of the New Forest National Park Authority said: “The majority of commuters are responsible, slow and careful drivers across the Forest but it’s easy to get complacent and we know that you are three times more likely to kill or injure an animal in the Forest after the clocks go back than before.  So we’re appealing to local people who use these routes to please #add3minutes to their journeys in the darker nights and drive slowly for New Forest animals.”

The four main routes where accidents occur are Lymington to Dibden Purlieu via Beaulieu, Brockenhurt to Sway, Burley to Picket Post and Cadnam to Godshill.