Wingwalkers are back! This year’s line-up for the Bournemouth Air Festival revealed 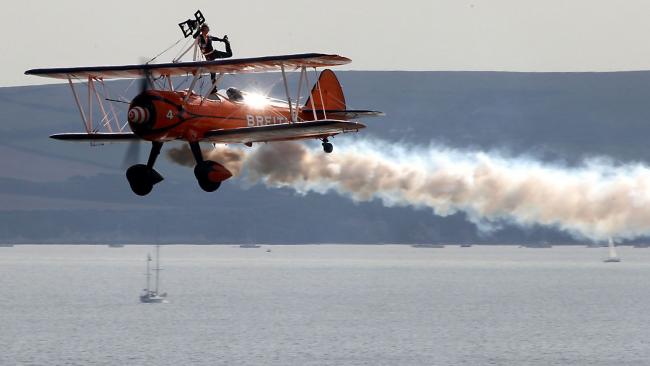 IT may be a few weeks away still, but the pre-flight checks are under way.

The four day Bournemouth Air Festival was officially launched last week at the town’s Hotel Miramar and being only 12 miles from the Red Shoot Camping Park, it makes an excellent and exciting day out during your stay with us.

There are new ‘faces’ in the line-up and they include the B25 Mitchell, Strike Master and the Swiss Air Force Super Puma helicopter display team. They will appear alongside the event’s established big names including the Red Arrows, Typhoon and Sally B.

A revamped Night Air programme welcomes a mini tattoo on the East Overcliff (Thursday, Friday and Saturday evening) with the RAF Queens Colour Squadron, alongside the Royal Navy Beat Retreat sunset ceremony and unarmed combat displays by the Royal Marines. There is full flying programme each evening.

Display Pilot Captain Matthieu Ghiringhelli said: “On behalf of the Swiss Air Force I am delighted we will be participating at this summer’s Bournemouth Air Festival – we have heard great things about the event on the air show circuit. I hope visitors will enjoy watching the incredible agility demonstrated by the Super Puma Display Team.”

The Red Arrows will be performing at the festival and visitors can see the breathtaking team in action at the set time 3.45pm on all four days. Joining the Reds and the Typhoon will be the ever popular Battle of Britain Memorial Flight and interactive RAF Village.

RAF Wing Commander Heather Ratnage-Black said: “The Air Festival is a high priority event for the Royal Air Force, in terms of audience numbers it’s perfect for showcasing our aircraft and offers a first class arena for engaging with the public. The event allows the public the opportunity to talk directly to our personnel and discuss the opportunities to have a career within the service, in over 50 roles ranging from engineering to catering.”

From a Royal Navy perspective, there’ll be four warships, Royal Marines with landing craft and the Black Cats helicopter display team. The Royal Navy Village makes it usual appearance as does the Royal Marines Band.

The Breitling Wingwalkers are returning with the ever-popular Tigers Parachute Team making daily jumps from 6,000 feet freefalling at 120mph.
Tigers Captain, Ian Wicks said; “Bournemouth is the highlight in our display year. The crowds are fantastic, the reception, the organisers and staff are awesome. It sets the precedent for all other air shows.”

Since 2008, the Bournemouth Air Festival has attracted more than 8m visitors. It is one of the biggest free festivals of its kind in Europe. The air festival charities this year are ABF The Soldiers’ Charity, John Egging Trust and the Royal Navy and Royal Marines Charity.